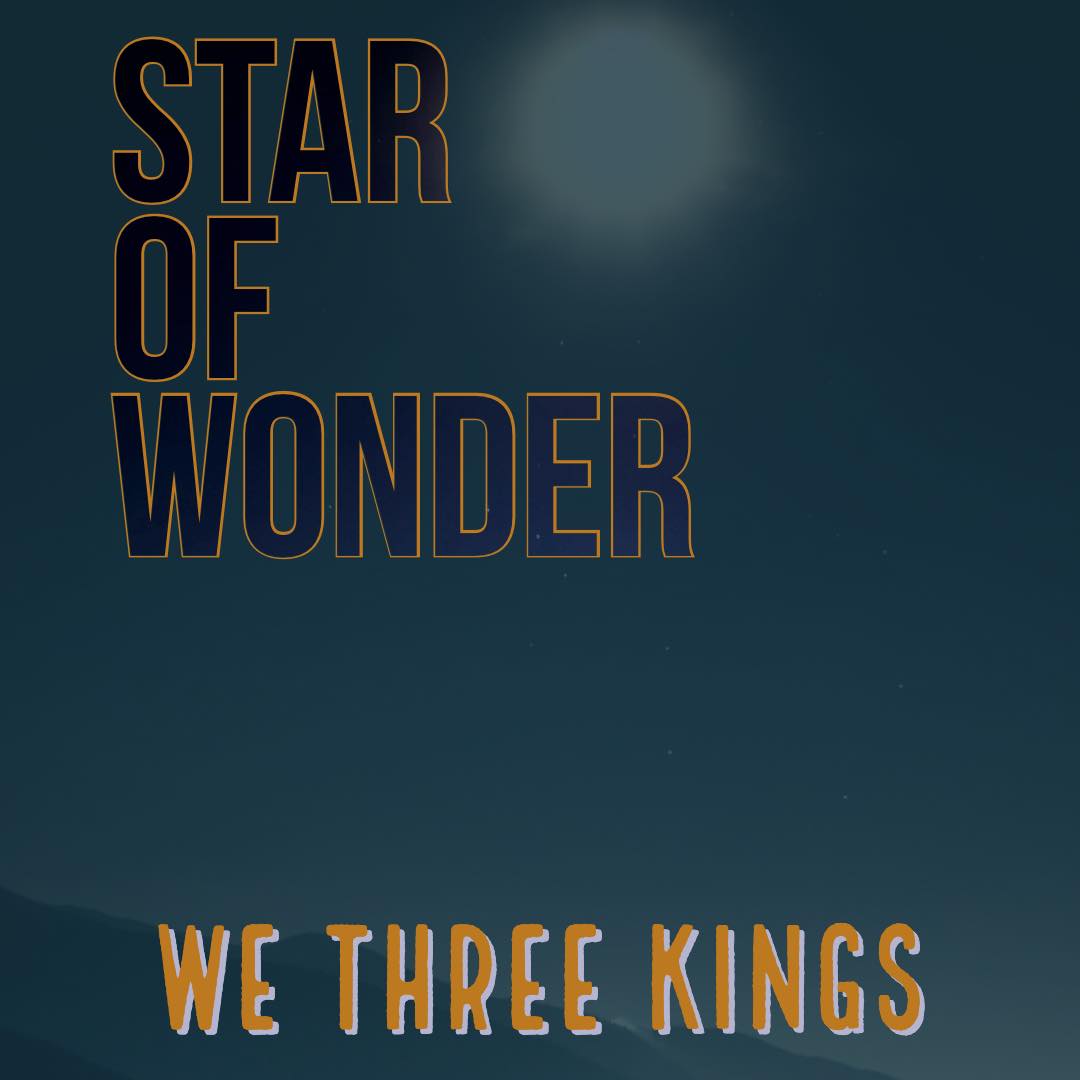 westward leading, still proceeding, guide us to thy perfect light.

The Christmas Star. It is the crowning jewel of the Christmas tree. We love the Star of Bethlehem, the mystery and the magic of it all. The mysterious visitors from the East bringing extravagant gifts to the newborn king. The Christmas Carol We Three Kings continues to capture our imagination as we sing about this “star of wonder.” Over the next two posts, we will diligently consider 1) The origin and nature of this star with royal beauty bright and 2) The identity and background of these Three Kings of the Orient, also referred to as “Magi."

Who were these “wise men?” Where did they come from? How did they know to follow the star? And was it really a star at all? If it wasn’t a star, what was it? The foundation for this entire story is found in Matthew 2:1-12. Here are a few of the highlights-

“Now after Jesus was born in Bethlehem of Judea in the days of Herod the king, behold, wise men from the east came to Jerusalem, saying, “Where is he who has been born king of the Jews? For we saw his star when it rose and have come to worship him.”… After listening to the king, they went on their way. And behold, the star that they had seen when it rose went before them until it came to rest over the place where the child was. When they saw the star, they rejoiced exceedingly with great joy. And going into the house they saw the child with Mary his mother, and they fell down and worshiped him. Then, opening their treasures, they offered him gifts, gold and frankincense and myrrh.” (Matthew 2:1-2, 9-11)

That’s it… that’s all we know… None of the other Gospels tells us anything about the wise men and the Star. What does it all mean? Where does it all begin? Let’s begin, in the beginning…

“In the beginning, God created the heavens and the earth.” Genesis 1:1

If the star of Bethlehem was indeed a star, it is most likely that God created this star at the foundations of the earth. According to Albert Einstein’s theory of special relativity, the speed of light is approximately 186,000 miles per second. Our nearest star, the Sun, takes 8 minutes for its light to reach the earth (92,960,000 miles). The second nearest star to the earth, Proxima Centauri (nicknamed “The Red Dwarf”) is 4.243 light years away.

Those who believe in a young earth, believe that when God created the universe, he created it as what apologists describe as “fully functional.” What does this mean? It means that God created plants fully grown, birds that could fly, a human being (Adam) who was fully grown and an earth and universe that was also “grown up.” This would make the universe appear to be older than it actually is. In this line of thinking, the light of stars that may be thousands of light years away, would have been present immediately.

However, the universe is still a creation in progress right? People are born, trees are planted and the universe continues to grow and change. Scientists are discovering that there are old stars dying off, and new stars being born quite regularly in the vastness of space. So, it should not be of any surprise that the Star of Bethlehem may have appeared “suddenly” in the western sky. So, if a bright star were to be born shortly after the Fall of mankind, and it were fairly close to the earth, perhaps approximately as close as the Proxima Centauri star, how long would it take for it’s light to reach earth? Approximately 4,200 light years, which is about the same amount of time that Biblical scholars believe transpired between the sin in the Garden of Eden and the arrival of Christ. Is it possible, that God created the Star of Bethlehem as immediately after sin entered the world? Yes, it is definitely possible!

Yet, this would be no ordinary star. In fact, every scientist agrees that the description and “behavior” of this star is unlike any celestial thing ever recorded. (It is not a comet, a meteor, a nova or a supernova). Hubert J. Bernhard, who for many years was a lecturer at San Francisco's Morrison Planetarium made a series of four LP record albums in 1967, trying to educate and popularize astronomy. They were called "The Planetarium Lecture Series" and one of his topics dealt with the Star of Bethlehem. Near the end of his lecture Bernhard placed this discussion into perspective when he said: "If you accept the story told in the Bible as the literal truth, then the Christmas Star could not have been a natural apparition. Its movement in the sky and its ability to stand above and mark a single building; these would indicate that it was not a normal phenomenon, but a supernatural sign. One given from on high and one that science will never be able to explain.” (www.space.com). Other astrophysicists agree, “the Christmas Star is still mysterious. No phenomenon known to astronomy truly seems to match it.” (www.space.com).

Should we be surprised that God would do something that cannot be explained by science to announce the birth of Christ? Saint John Chrysostom the Archbishop of Constantinople who lived around 407 AD, recorded his thoughts on the matter by arguing that it had to have been a star as unique as the pillars of fire that led the Israelites by night in the book of Exodus.

“this star was not of the common sort, or rather not a star at all, as it seems at least to me, but some invisible power transformed into this appearance, is in the first place evident from its very course. For there is not, nor has there been any other star that moves by this way, the sun, or all the other stars, move from east to west; but this was wafted from north to south; for so is Palestine situated with respect to Persia.

In the second place, it appears not only in the night, but in midday, while the sun is shining; and this is not within the power of a star. But this by the excess of its own splendor overcame even the beams of the sun, appearing brighter than they, and in so much light shining out more illustriously.

In the third place, from its appearing, and hiding itself again. For on their way as far as Palestine it appeared leading them, but after they set foot within Jerusalem, it hid itself: then again, when they had left Herod, having told him on what account they came, and were on the point of departing, it shows itself; all which is not like the motion of a star, but of some power highly endued with reason. For it had not even any course at all of its own, but when they were to move, it moved; when to stand, it stood, dispensing all as need required: in the same kind of way as the pillar of the cloud, now halting and now rousing up the camp of the Jews, when it was needful.

In the fourth place, one may perceive this clearly, from its mode of pointing Him out. For it did not, remaining on high, point out the place; it not being possible for them so to ascertain it, but it came down and performed this office. For you know that a spot of such small dimensions, being only as much as a shed would occupy, or rather as much as the body of a little infant would take up, could not possibly be marked out by a star. For by reason of its immense height, it could not sufficiently distinguish so confined a spot, and reveal it to those who were desiring to see it. And this anyone may see by the moon, which being so far superior to the stars, seems to all that dwell in the world to be near to each and every one of them. How then, tell me, did the star point out a spot so confined, just the space of a manger and shed, unless it left that height and came down, and stood over the very head of the young child?

For, since He who came was to put an end to the ancient polity, and to call the world to the worship of Himself, and to be worshipped in all land and sea, straightway, from the beginning, He opens the door to the Gentiles, willing through strangers to admonish His own people. Thus, because the prophets were continually heard speaking of His advent, and they gave no great heed, He made even barbarians come from a far country, to seek after the king that was among them. For what could they have to say, who did not receive Christ after so many prophets, when they saw that wise men, at the sight of a single star, had received this same, and had worshipped Him who was made manifest.”

If the “star" was in fact, similar in nature to the moving pillars of fire in Exodus, we may agree with the Biblical scholars who conclude that the star was in fact the Shekinah glory of God. Just as God’s glory guided the Israelites out of Egypt, His glory guided the magi to the place where Christ resided.

At this point in history, every celestial light was identified as a “star.” Perhaps it is best to view the Christmas star as a miraculous occurrence outside the limits of science and astrophysics. God, the supernatural creator of every scientific law or principle is still an artist at heart who has the freedom and the audacity to paint outside of the lines whenever the expression suits Him.

As one astrophysicist concluded, "Indeed, perhaps this is a mystery that modern science can never truly unravel. Astronomy has taken us as far as it can go. The final decision is yours, alone.” (www.space.com)